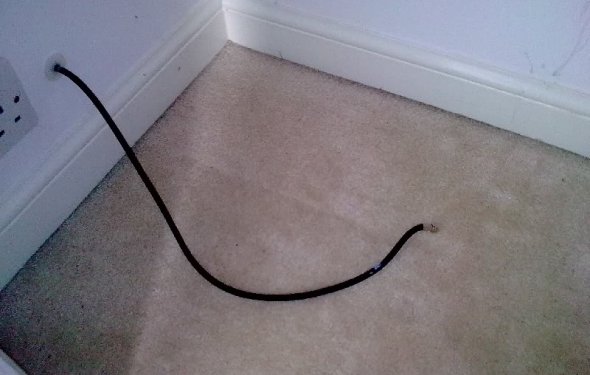 What is an LNB? What does an LNB do? What sort do I need? We explain the basics of an LNB.

What is an LNB?

LNB stands for “Low Noise Block downconverter”, and is the box that sits on a pole pointing to the middle of a satellite dish. The LNB pulls in the satellite signal that’s reflected from the dish and sends it to a set-top box

There are many different types of LNB out there – depending on the type of satellite dish and the satellite service you’re looking to get. On this page, we limit our discussion of LNBs to those that are used to get services in the UK from Sky Digital or Freesat.

Assuming we’re talking about Sky or Freesat, then the common types are single, dual, quad or octo Universal LNBs.

The difference here is the number of outputs that the LNB has. For instance, if you have two satellite TV boxes in your house, you need two feeds from the LNB – one for each box.

As we said above, each satellite receiver needs its own feed from an LNB. This picture shows a Quad LNB – an LNB with four outputs:

Twin Tuner boxes? Some satellite receivers, such as Sky+, Sky+HD and the Foxsat Freesat receiver, have two tuners – these let you record one satellite channel while watching a different satellite channel. This means that they need two feeds from the LNB, not one.

Before picking an LNB, you need to work out how many boxes you want to feed. The most you can feed is 8, using an Octo LNB. An Octo LNB will feed 4 twin-tuner boxes or 8 standard satellite boxes (or any combination).

My box has two sockets, but I only have one feed!

If you have a standard satellite receiver and want to switch to something like Sky+ or Sky+HD, you will find that your new box has two satellite sockets, but you may only have one lead coming from your dish.

To make full use of a box that has two tuners (e.g. record one channel while watching another), you need an LNB with two or more outputs, and two feeds from the LNB. If you’re ordering Sky+ or Sky+HD from Sky, they will replace your LNB if needed and run the second feed cable for you. Nothing for you to worry about. To order Sky+, or Sky+HD, go to

Q. Can I use Sky+ with only one feed? Yes, but you’ll not be able to use the full service. You won’t be able to record one channel while watching another, and some programmes that you set to record will fail if they record using the second dish feed

Can I split one satellite feed into two feeds?

This is a fairly common question. What should you do if you only have one feed from the dish, and two sockets on a box? Sadly, you can’t split a single feed from an LNB to let it feed two tuners at the same time.

Why? Satellite receivers send voltage and signals to the LNB to get the LNB to change frequency and ‘polarisation’ (some channels are Vertical and some are Horizontal). If you have two receivers both trying to switch a single LNB, one box will win, and one will lose.

You can get an LNB switch box that will let you switch your single feed to either of two receivers – just not to feed both at the same time. These are no substitute for having two dedicated feeds from the LNB though.

Need an LNB, cables or connectors?

Sometimes, but rarely, LNBs develop a fault. Typically, this may mean that you can’t get any channels, or you can only get channels from one polarity (Horizontal-only, or Vertical-only).

If you’re with Sky and can’t get your channels, call them for advice – they may need to come out and replace your LNB. Otherwise you can replace an LNB yourself. You can buy LNBs suitable for Sky and Freesat from Maplin.co.uk.

Source: www.radioandtelly.co.uk
Related Posts
Categories
Latest Stories
Consumer Reports cable TV Take a close look at your cable bill. It’s a confusing onslaught of charges...
Cable TV in USA There’s nothing quite like watching TV in HD, especially when it’s FREE!...
Windstream cable TV 50, households in 13 communities throughout North Carolina will be able...
Power cable for Toshiba satellite Including 1100, 1100-S101, 1100-S1105, 1105, 1105-0, 1105-S101, 0-S153...
History Channel without cable What was once a network known for great documentary pieces about historical...